In January of this year, we wrote about an important upward trend reversal for the interest rate markets in 2016, and that a further anticipated hike this year is realistic. What are the developments so far? Long-term interest rates (on 10-year German government bonds) were at 0.15% at the beginning of this year and have since increased by 21 basis points on balance to the current level of 0.36%.

The 3-month Euribor is still negative, listing at a similar level of -0.33% earlier this year. This week, ECB president Draghi also spoke in more positive terms about the current stimulus policy of the central bank, and it is only a matter of time before inflation starts rising. More and more signals point to a further increase in interest rates in the period ahead, with a multi-year uptrend of interest rates becoming more likely.

Do not wait until Euribor goes up, otherwise the favourable low interest levels at which you may now gain security for the years ahead may no longer be achieved.

The ECB has one target, which is rising inflation

In the recent ECB meeting this month, the economic circumstances in the EMU zone were the subject of discussion once again. According to Draghi, the risks for the EMU have improved, with the deflation scenario, which was reason for concern until last year, being pushed into the background. The economic growth forecasts for the EMU as a whole have been upgraded slightly for 2018 as well as 2019. At 1.1%, core inflation (inflation excluding energy) actually still lags behind the ‘just below 2%’ target of the ECB. Draghi has confirmed the current loose monetary policy – including the monthly purchasing of EUR 60 billion in European government bonds and other debt securities – will be continued until the end of this year.

A further increase in interest rates after the summer?

We foresee continued growth in the EMU due to the recent decline in commodity prices – including oil prices – and a decline in European unemployment. In Germany, the unemployment rate is actually far lower than in the rest of the EMU countries (see graph below). (Wage) inflation may easily start rising in the event of further growth of the German economy and further tightening on the German labour market, where a number of multi-year wage agreements expire this year. In this case, it will be increasingly risky for the ECB to keep its monetary policy as loose as it currently is for the EMU, and especially for Germany. 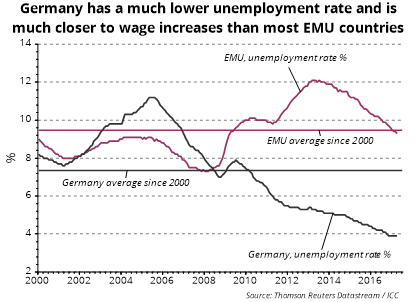 The current monetary policy of the ECB has another drawback. At this point, the policy keeps the Euribor so low that inefficient businesses are kept afloat and governments – mainly of South-European countries – receive few incentives to implement structural reforms with regard to their own economies.

The Euribor and a downscaling of the ECB’s monetary policy

Given that the drawbacks of the current monetary policy of the ECB will outweigh the benefits at some point, this will also have an impact on the Euribor. The expectation is that the ECB will start downscaling its loose monetary policy as of the beginning of next year – probably over a six-month period – in steps of EUR 10 billion less government bond-purchasing every month. In this scenario, the first ECB rate hike is likely to occur by the end of 2018. This will also exert upward pressure on long-term interest rates, with a steeper yield curve being very realistic (see graph below). 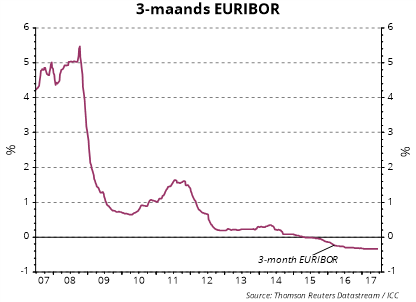 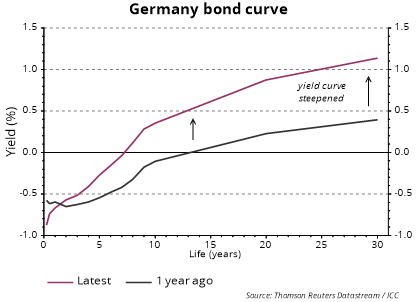 Is your financing still (largely) based on variable interest rates? If so, this might be inexpensive, but it involves risks that have increased distinctly. The financial markets have priced in a great deal already and long-term interest rates will move upwards on balance. At this point, you still have good options for hedging your interest rate risk (increase in Euribor) for several years at favourable levels. If you postpone this until Euribor starts rising, you will notice at some point that long-term interest rates have gone up considerably in the meantime, with the hedging of interest rate risks having become more ‘expensive’.

Do you require insight into your options? Do you want to know for exactly how long you can gain security and with which interest rate instrument and at what interest level? Let us map out your specific interest rate risks. The current interest rate market is still appealing in terms of the restructuring of existing interest rate swaps as well (with additional cash flow benefit).

We operate independently (of banks) and have no interest in the transaction you conclude (or not). We will assist you in selecting and concluding the most suitable interest rate instrument and will check and assess the pricing of your bank. This will assure an interest level that is more favourable than if you were to conclude an interest rate derivative with your bank without our assistance. After all, the improvement / saving of one 1 basis point on, for example, a 10-year swap (the difference between 0.82% and 0.83% in interest payable) times the principal sum times the term of the swap, will ultimately determine the benefit. The savings this will generate for you on your interest charges are a multiple of the consultancy fee ICC charges you.