Last week, President Trump fired an initial salvo at what could culminate in a trade war. This immediately creates a very negative sentiment among virtually all involved because trade restrictions were an important cause of the 1930 crisis. The latter ultimately led to the Second World War.

US stock exchanges initially reacted very negatively to the announcement that the US will impose import tariffs on steel and aluminium, but the S&P 500 index ultimately closed higher on the assumption that things are never as bad as they seem. Unfortunately, this cannot just be assumed. The EU came with an announcement before the weekend that it would impose import duties on a number of items imported from the US for an amount of approximately €3 billion, if the US were to follow through with this. Of course, Trump cannot simply accept this, so he stated over the weekend that the US would impose an import duty on European cars in this case. This alone shows how soon all this could spin out of control (as happened in the 1930s).

It is quite possible that Trump only intends to strengthen the negotiating position of the US in all manner of talks about international trade. For example, a high Chinese official is currently visiting Washington to discuss these matters, and talks are underway about a renewal of the NAFTA agreement. It may therefore be largely bluff on the part of the president. 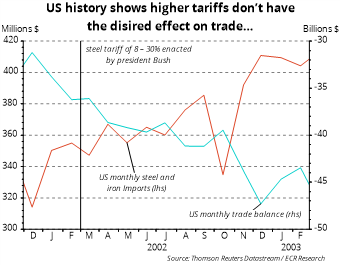 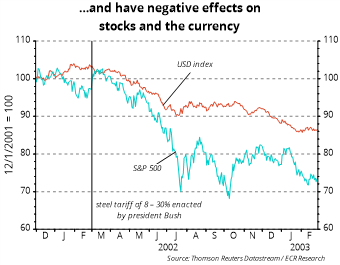 Increasing tumult in the White House

However, even if this were the intention of the president, there is no certainty that events will not continue to escalate first. We do not have a great deal of confidence in Donald Trump’s historical and economic perspective on things. In this respect, he has to rely on the advisors around him to a great extent. However, developments are heading towards complete chaos in the White House, with all manner of parties spending more time fighting each other rather than plotting a sensible strategy. More and more relatively trustworthy people within the White House are leaving or are falling into discredit. In other words, the situation is increasingly one of Trump taking decisions himself, based on his instinct. When it comes to import restrictions, Trump is more of a streetfighter than a strategist.

Unfortunately, there are more and more information leaks about his close relatives – to whom he listens sometimes – having made one strategic error after another. Add to this that special counsel Mueller’s investigation is taking on increasingly painful proportions for the president. This could easily tempt Trump into diverting attention away from this via a trade war. It must be remembered that congressional elections will take place in just over six months’ time.

Consequences for the financial markets

In short, the markets will have to price in the real possibility of a trade war. The question is what this means for rates and market prices. For shares and commodity prices, the situation is very negative indeed. Gold represents an exception as it is considered to be a safe haven.

It is more difficult to assess the consequences for interest rates. On the one hand, a trade war would drive up inflation via higher import prices. On the other hand, trade barriers would limit economic growth. Which of these two forces carries the most weight for interest rates will strongly depend on the extent to which a real trade war unfolds. We will have to wait and see, but it will probably result in a flatter yield curve in any event. In other words, it would come down to persistent high or even rising short-term interest rates, with long-term interest rates coming under (slight) downward pressure. This applies to both the US and Europe.

The most difficult task is assessing the impact of a trade war on the dollar exchange rate. Indeed, the following effects may be anticipated:

Considering the factors above, we will have to wait and see whether we are really headed for a trade war and, if so, how this conflict would develop. It is only then that it will be possible to get a better sense of the consequences for the US currency.